Well dear readers, I realise it has been a while since my last post (again), but something about the sudden cold snap inspires me to leave my usual tea haunt in search of new delights.
I regret to say I have a number of reviews languishing on my desk, miserably waiting for a touch up and a type out to you, my dear readers, including a review of my most favourite tea locale at the moment, but I fear the brief summer we enjoyed consumed my normal tea writing time with other pursuits.
Nevertheless, I have returned with a new post, and no less than 4 hours old! Read on friends, read on.

My colleagues, Madame P, Miss B and I found ourselves wandering the streets of Carlton North this afternoon, having concluded a business meeting in the area. "It is time for tea!" we cried, not yet prepared to return home. Being on the western side of the street, we approached Depot de Pain, a luxurious looking French patisserie. I immediately dismissed any ideas of obtaining tea there, as I'd had a rather unpleasant experience there with Miss B several years before.

As we passed by, a side window by the coffee machine popped open and a rather charming young barista stuck his head out, inviting us in to tea. Now, I would not like to compare our group to a giggling gaggle of school girls, but such was the barista's charm that this is essentially what we were reduced to. This may be why we found ourselves sat within the bakery several minutes later.

The inside was reminiscent of the bakeries of France, with beautiful cakes (or what was left of them by 5pm) and breads on display. Several nookish rooms were hidden around a display of produce, and there was a very relaxed atmosphere.

We asked our waitress for a menu, and were presented with only a food menu. A disappointment to be sure, but there were several tasty snacks, and Madame P ordered some spinach "sausage" rolls to be brought with our tea. Alas, these were waylaid and never appeared!

The tea itself was a brand we were unfamiliar with, a Ceylon Tea Bush, which Miss B thought she might have seen in small country town stores before. Certainly not a brand of fame in Melbourne. Our teas came with a small printed note about the product, a nice touch I thought. Miss B and I both went for Passionberry, while Madame P sipped Ginger and Peach. We were disappointed to find the teas flavoured with oils as well as natural fruit pieces, but they were enjoyable none the less. The Passionberry took a few sips to get used to, and the first mouthful was very tart with plum undertones. The tartness stayed through the whole drink, but became more berry like in flavour. 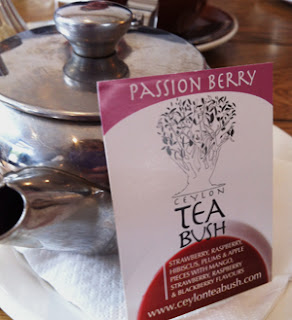 Overall the experience was very enjoyable, buoyed by banter with the charming barista, and we accidentally ended up staying past their closing time. I do enjoy a place where you are not made to feel like a villain for staying too long. I think it just goes to show that some places are worth giving a second shot.

You've stumbled across Melbourne's own tea review, The Tea Diaries. In search of that elusive perfect cup of tea in a land of coffee, I decided to start this review to catalogue my experiences. I hope you as a fellow tea connoisseur will find it useful, insightful and entertaining.